These days everyone’s excited about the Cloud, and for good reason. companies that have migrated the majority of their systems to the Cloud save on average more than 20% in IT spending as a percentage of revenue. Also, Cloud application projects have been found to deliver 2.1x times the relative ROI of on-premises ones. Those are some great results, and the benefits of Cloud only continue to increase.

As the world of Cloud evolves, it’s important to distinguish between siloed Cloud environments versus a multicloud approach. Some people have a perception that the Cloud means Cloud—singular. However, to truly take advantage of the Cloud, you need to understand that there isn’t going to be just one Cloud when all the dust settles, but many of them.

For example, when you say, “We’re moving all our business systems onto the Cloud,” you’re essentially saying, “We’re moving them onto the Internet, where they will be accessible anytime, anywhere.” That statement is still true, but what I’m talking about with the concept of a multicloud world takes things a step further. While Cloud services all run on the Internet, they are often actually very siloed. Take Cloud environments such as Microsoft Office 365, SalesForce and Zenefits. In and of themselves, these Cloud applications provide critical services to businesses, and yet they don’t easily interact with one another. This leaves companies trying to piece together various Cloud environments, and essentially creating a version of the former on-premises world, but in the Cloud.

In the old on-premises world, a business would buy a variety of applications, and then be faced with getting them to talk to each other. Integration was the bane of many an IT department’s existence, as was customizability and adaptability. And while the Cloud can make that easier, you may still wind up in the same silos you had in the on-premises world.

One of the exciting things that happened early on in the Cloud computing era was that a set of open standards were defined. These standards dictate the way pieces work for an individual application, but they also dictate how one application talks to another application. This is what is known as “cloud interoperability” and is critical for businesses to not end up in a siloed Cloud environment.

I’ll go into techie acronym mode here for a second. There were standards early on called SOAP (Simple Object Access Protocol) and SOA (Service-Oriented Architecture). After those came the modern version of a REST (Representational State Transfer), as in a “RESTful interface.” These are the sorts of standards you want to be looking for your applications to support to allow easy integration. (Yes, Acumatica 6 is fully supportive of a RESTful interface.)

Choosing the Right Platform for the Future

As I’ve already noted, businesses who have moved their systems to the Cloud often use a wide range of applications. This is now starting to create real challenges with regards to scale, interoperability, cost-effectiveness, and integration. For businesses who want to be strategic and mitigate these issues, one of these applications needs to be selected to be at the center of this multicloud world. It would make sense to anchor this in one that’s the most critical for your business: Enterprise Resource Planning. 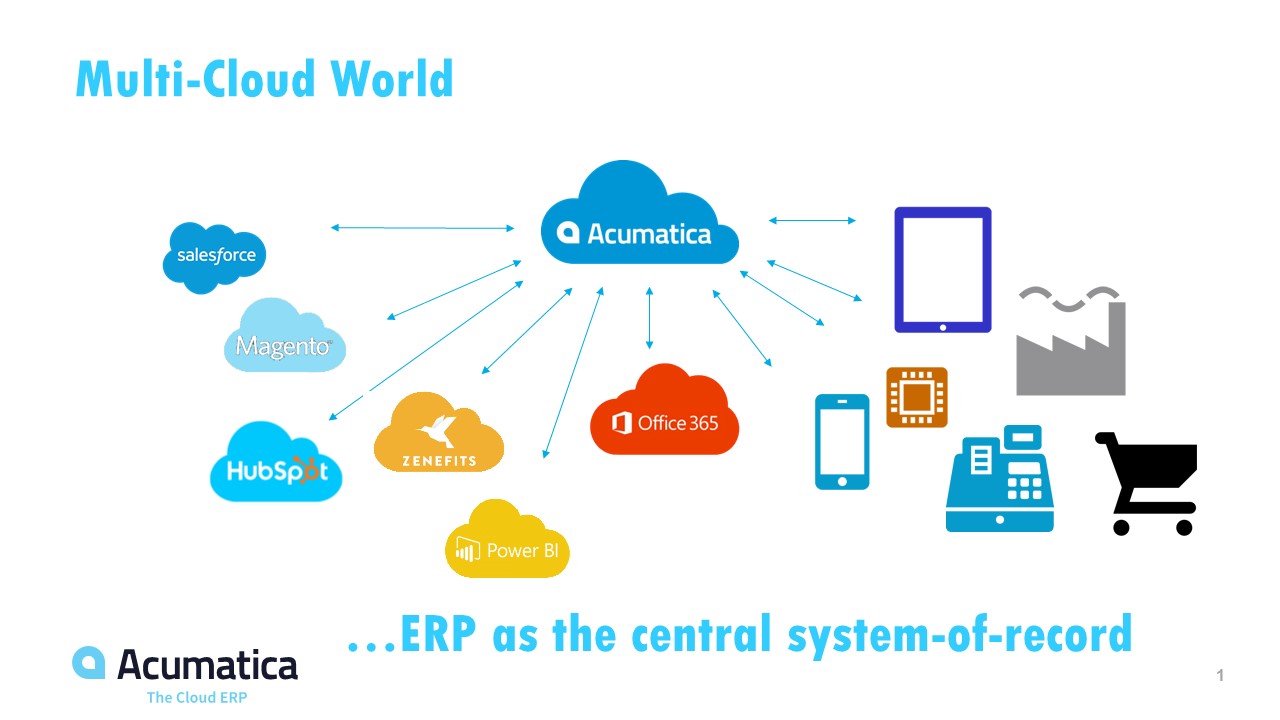 You might call this a tiny bit self-serving, but I would offer up that an ERP system truly is the system of record for a business. If other systems stop or break, the business can generally move on. If the ERP system breaks, you can’t order or ship products or bill your customers. Things come to a screeching halt. So thinking about your ERP Cloud strategy as the center point of this multicloud hub is something I would strongly recommend.

For example, Guardian SealTech, a company that provides preventative and corrective services to oil and gas businesses in the United States and Canada, was having difficulties managing disparate systems as they grew through acquisitions. These systems were making it increasingly difficult to meet their business goals. They solved these multilcloud issues by choosing Acumatica as their cloud ERP. Read it about it here.

Another example is PayWith. PayWith helps brick and mortar companies connect, communicate and transact with customers through mobile loyalty, rewards and marketing programs. They needed a system that could not only handle their first customer, but their 100th and 1,000th and the tens of thousands of mobile transactions they imagined as PayWith scaled. PayWith found their solution with Acumatica. Check out the full case study here.

As the title of this post asserts, companies who embrace the multicloud world are set up for success. They are light years ahead of their competitors, because they’ve chosen to center their entire business around one main ERP platform that easily integrates into other Cloud environments. Their IT department doesn’t sweat bullets when the CIO shares about a new Cloud application that the ERP system must integrate into. Their CFO has one less major headache to deal with, as the cost effectiveness of the ERP platform enables the business to put their money where it matters most. And, finally, their customers are happy because they can count on a business that is always taking orders, shipping on time, and making their buying experience the best in the industry, creating customer loyalty like none other.

There are many topics to drill into in this multicloud discussion, such as licensing, cloud scale, mobility, and cloud certifications. The Acumatica team and I will be going into those subjects in a blog post series centered around the concept of a multicloud world. After all, the multicloud world, as you might imagine, is rather multifaceted. Stay tuned for future posts.

If you’d like to learn more about the multicloud world we are building for, I’d encourage you to come to Acumatica Summit 2017. I’ll be going in to more details about the multicloud world at the Summit, including how we are structuring the Acumatica platform around this vision, and the product roadmap we’ve laid out to get there. Register now and enjoy early bird pricing. See you in San Diego in January!

We can scale without extra costs because the fee structure isn’t prohibitive. With other software, every time you want to add a new user or feature, they charge you huge amounts of money. Acumatica has extra modules that only cost a few thousand dollars and you can be up and running in a few hours. It doesn’t take weeks to train multiple parties.

The “Hyper Converged Hybrid Cloud” and the MultiCloud World

7 Signs It's Time to Change Your ERP System

Acumatica Hits the Road for Connected World and Connected Business