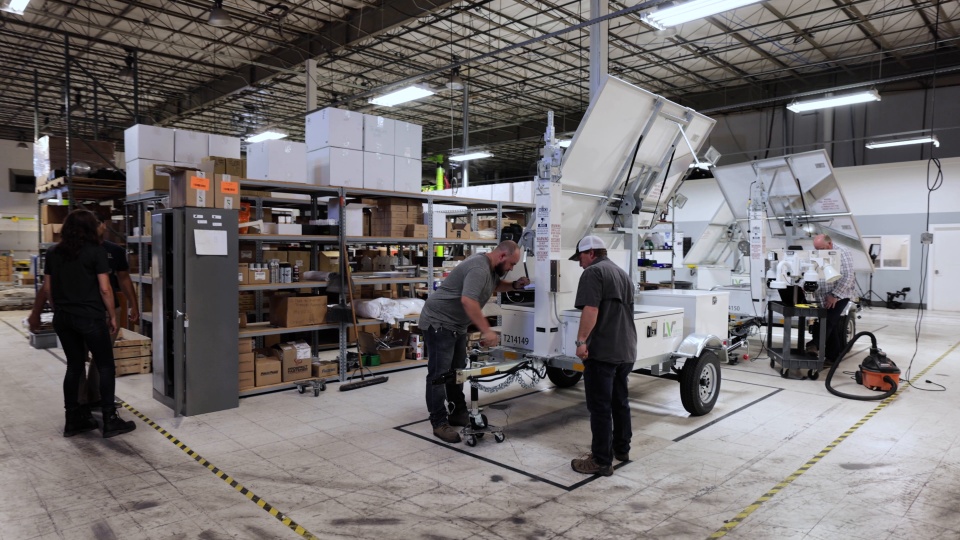 LiveView Technologies, Inc. (LVT) was founded 15 years ago to help lenders and homeowners monitor a high-end residential construction site in Park City, Utah. Most of the homeowners lived in California. The lenders operated out of Salt Lake City, so they needed a way to monitor the site remotely, explains Andrew Gale, Chief Financial Officer and Chief Operating Officer. LVT mounted a camera on a pole and successfully set up a system to monitor the construction site. Soon, state transportation departments asked for similar systems to monitor snowfall in various mountain ranges.

When companies began asking for more sophisticated systems, LVT designed a fully contained, standalone trailer with a 30-foot boom to hang IoT devices depending on a company’s needs. The trailer transmits data via a cellular network and is solar-powered.

“We took it to a trade show, and the first people in the booth were from Walmart,” Gale says. “That led to a single-source contract. I can’t tell you the number of unsolicited calls we get from people in a Walmart parking lot asking how they can get one to monitor a solar farm, a landscaping business, or other business.”

LiveView Technologies can deploy the system anywhere and have it up and running in 30 minutes by creating a fully self-contained and self-powered system. “We don’t need hardwired internet technologies or the involvement of an IT team, so we avoid red tape. And there’s no need for a power supply,” Gale says. “The vast majority are in big-box parking lots like Home Depot, Walmart, and Kroger, and the advantage we have versus pole-mounted cameras is that our units are visible with flashing strobe lights. We let a client’s customers know they are being watched.”

Customers have reported up to a 60% decrease in parking lot incidents, which include anything from assaults to carjacking to vandalism, he adds. “Ironically, one of our largest customers came to us and said they wanted a system because when another big box retailer put one in down the street; it drove all the bad guys to them,” Gale says.

LiveView Technologies was using legacy QuickBooks as its financial system, which was unsupported and disconnected from its E2 manufacturing system. “We are different from a typical technology company in three ways,” Gale says. “First, we are a hardware and a software company; second, we’ve always been profitable and have never taken any outside money; and third, we’ve bootstrapped everything so some of our tools reflected that bootstrapped environment.”

Gale was hired to put LVT’s financials in order, and to prep for a three-year audit. Company executives were evaluating ERP software and were close to signing with Microsoft Dynamics. “During the interview process I told them they should really look at Acumatica,” Gale says. “A year before, I had done an ERP evaluation with Microsoft Dynamics, Epicor, and Acumatica and went with Acumatica. I told them Acumatica was a really cool package—one that they really needed to look at.”

Using QuickBooks and other legacy software, LVT had problems with inventory accuracy. “They could literally watch inventory change when no one was in the system,” says Gale. “They had lost faith in the financial system in use at the time.”

The legacy accounting system was not integrated with the sales order process, and the company lacked manufacturing planning and scheduling functionality.

Independently before Gale was hired, LiveView Technologies executives decided to implement Acumatica. They viewed Gale’s impressive experience and 12 ERP implementations as critical to their success; none had implemented an ERP before.

Executives were impressed with Acumatica’s unique pricing model, its ability to connect to third-party software via Acumatica’s open APIs, and its full functionality, including manufacturing. Gale worked with Premier Computing to deploy Acumatica Cloud ERP.

Acumatica’s user licensing model was “an icing-on-the-cake factor,” for LVT that eliminates the time and effort of deciding who used the system and when. The company is growing rapidly; when Gale started, LVT employed 75. The company grew to 230 by the end of 2020, and he expects to reach 350 by the end of 2021.

“I do not have to think about who to give access to, or whether it would be worth extra subscription fees that other ERP companies charge,” Gale says. “With Acumatica, we don’t have to worry about that, and it makes a ton more sense.”

LiveView Technologies now has a single connected business solution providing in-depth data visibility. “With Acumatica, we have a much tighter connection between the sales process flowing to manufacturing, and our inventory accuracy improved substantially,” Gale says.

The company has better visibility into production floor orders that flow seamlessly into manufacturing, which has improved inventory accuracy. “The fact that we can build out detailed BOMs and have good information about product costing is a big benefit and something that we really struggled with before,” Gale says.

Better inventory visibility has resulted in better purchasing and planning.

Having a single, connected system led to the integration of purchasing and payables, a process that is now paperless. “That’s really been huge,” he says. “While payables and receivables are not the most glamorous, we have seen a huge improvement in time savings, and we are much more accurate with suppliers.” Gale estimates they shaved 50% of the time it takes to process AP and AR, and they can close financial statements faster as well.

It took 15 days to close out a period before, and now it takes just five days, a number Gale expects to shrink as they use Acumatica Cloud ERP more.

One of LVT’s AP clerks went on maternity leave in January, although she continued working from home. “I didn’t see her for four months, yet she worked day in and day out. I think she’s been in office a grand total of six or seven days, and most of the accounting staff is the same way because of COVID,” says Gale.

The company didn’t miss a beat during the pandemic because cloud-based Acumatica allows employees with an internet connection to work from anywhere. “If we were doing what we were before, there would have been no way to work as seamless as we are today. It would have been a big challenge,” he adds.

“Avalara’s sales tax integration has been really beneficial for us,” Gale says, explaining that the company has a fleet of its own units they rent out. “We do business in 45 states, and we can now add additional state information quickly. That has been extremely helpful.”

“I would have had to hire a full-time person just to handle the different sales tax scenarios, and now it’s done in the background seamlessly.”

With Velixo, an Excel-based reporting tool, executives can slice and dice data like never before. “Velixo has been a real lifesaver for me, and Acumatica’s ability to push and pull data has been phenomenal,” Gale says.

Reaching the Next Level

LiveView Technologies plans to grow rapidly. The company will soon move its administrative team into a high-tech office space, freeing room to expand manufacturing in its existing two locations. “The nice thing is because of the cloud structure of Acumatica. It will be like we are all in the same building so the move isn’t a great big deal,” Gale says.

LVT plans to use Acumatica’s manufacturing, deferred revenue, and contracts modules, and add barcoding and other processes to make its manufacturing operations more efficient. The development team is tying its internal software systems to Acumatica to create a data warehouse system.

“We are the sole provider of mobile security monitoring systems around the country. Significant organizations want to monitor cell phone towers and other remote equipment, so everything we do is looked at through a lens of how we can scale, and Acumatica fits that bill for us in a ton of ways,” Gale says. “Acumatica has easily demonstrated its ability to scale.”