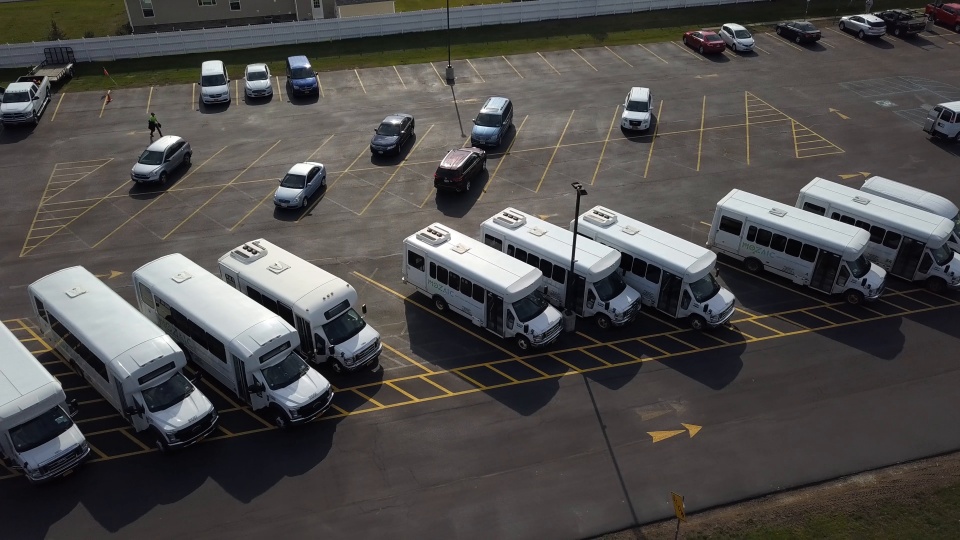 "Our nonprofit is so complex that the only way we can manage it from a financial point of view is to have a powerful solution, and for us, that is Acumatica."
Allen Connely, CEO
Mozaic
Challenges
ERP Solution
Outcome
Challenges

Mozaic is a 501(c)(3) not-for-profit organization born from the merger of two The Arc of New York chapters: The Arc of Seneca Cayuga and The Arc of Yates. The organization serves more than 2,000 individuals with intellectual and developmental disabilities and their families, in the Finger Lakes Region in New York, making them the largest provider of services for individuals with disabilities in the Central NY region.

In addition, it operates a thriving integrated enterprise, Finger Lakes Textiles, which has made winter hats and other apparel for the U.S. Armed Forces for more than 25 years, and more recently, the public at large under the Arctic Gear retail brand with 100% of the proceeds going back to the mission.

“We are very complex for a $30 million operation,” says Tammy Raub, CFO of Mozaic. “Our newest strategic initiative is managing and saving other nonprofit organizations.”

Raub knows only too well the challenges nonprofits face with limited funds, growing governmental requirements, shrinking donor bases, and increased demand for services. Before Mozaic, she was the CFO of Arc of Yates, which provided day and community support services, and transportation, to people with developmental disabilities. It also operated residential housing units and the Keuka Lake School, which helped children and their families from 18 months to pre-school with special needs services through integrated classrooms.

At Yates, limited funds meant Raub operated on an inefficient legacy financial system. “I walked into a mess; they had a legacy Microsoft Dynamics system that would sometimes be up, sometimes be down, and it was on-premises,” Raub says. “It was susceptible to our network going down, and we had security issues within that environment.”

Because Yates had previously lost its CEO in 2014, the nonprofit had explored merger opportunities prior to Raub joining in 2016. Under the Arc NY chapter manual, anytime an Arc loses a CEO or CFO, they are required to explore potential mergers. The Yates Board didn’t want to spend money on a new financial platform because they thought they would adopt the one in use by a merger partner.

Only the merger Yates was evaluating at the time didn’t pan out.

Acumatica Adoption Begins at The Arc of Yates

When she investigated upgrading the legacy Microsoft Dynamics system, Raub learned it was so far out of support it would cost as much to update as it would to implement a new solution. At the time, the nonprofit was forced to operate outside of the legacy system with spreadsheets and Access databases, an inefficient system that required double entries.

Raub convinced the Yates board it needed a financial platform that was scalable, cloud-based, had self-service functionality, and was flexible enough to handle for-profit services and nonprofit services as well as fund accounting, which the legacy Microsoft Dynamics system lacked.

“We were planning to expand and wanted to scale without per-user fees,” Raub says. “One of the major things we wanted was scalability, and that’s what Acumatica brought to the table.  It was the only one that checked everything in our box of must-haves and many nice-to-haves.”

Acumatica Cloud ERP provided an easy-to-learn interface, self-service functionality, and automation, and it could allocate and parse expenses. “Acumatica can do that, and not a lot of others can unless you pay a gazillion dollars for an SAP-like system,” Raub says. “Acumatica is reasonable and powerful. It is subscription based with upfront costs but nowhere near the order of SAP, yet it comes with all the functionality.”

Yates implemented Acumatica, a move that shaved seven days off month-end closes because shadow spreadsheets were no longer needed; data was now in one system. Executives gained access to real-time information, and today multiple employees work in the system without it crashing like the legacy system did if more than one person was using it.

Everyone gained access to Acumatica, which provided fast and easy access to customer information, and which they didn’t have previously.  ”Our contacts are in the system and we can email invoices, eliminating double entry,” Raub says. “We are in the process of converting billing spreadsheets to direct key-ins by the departments, and we know our aging buckets now which were difficult to figure out in the old system.”

Because of Acumatica’s unlimited user policy, every employee has access, no matter where they are. And because Acumatica Cloud ERP is based in the cloud, Arc of Yates gained a strong disaster recovery solution, which they needed much sooner than expected.

Merger Leads to Broader Acumatica Use

“The Seneca Cayuga finance team had some of the same issues with Sage as we did with Microsoft Dynamics,” Raub says. “It wasn’t kept up, and it had stability issues. As part of the merger, we were looking to adopt best practices, and everyone loved the Acumatica financial platform. They couldn’t wait to come together on one platform.”

The new entity planned to go live on Acumatica July 1. “But then Covid-19 hit in March, and we had to furlough hundreds of employees,” Raub says. “It was heart wrenching. 2020 is the year I would like to forget.”

On June 30th, just before the broader Acumatica Cloud ERP implementation go live on July 1st, Mozaic was hit with a ransomware attack.

“It spread throughout all three counties; all the computers and servers except for one Active Directory server, one file server and our backup, which we had unplugged the week before,” Raub says. “It was a nightmare of a time for the whole agency.  We were down for two weeks without Internet.”

Raub took on the role of head of IT and quickly assembled a team to wipe 500 computers. “It took a few weeks to get everything back up,” she says.

Only one program was untouched: Yates’ Acumatica ERP. Hosted in the cloud, the software was secure and untouched.  “There was absolutely no effect at all on Acumatica; it was just a matter of not having the Internet so (anyone needing it) just worked from home,” Raub says.

Seneca Cayuga was still on Sage, which was on-premises. So, when Raub contacted Sage in order to access the data, she was told the only solution would be to pay $20,000 for a new version.  “Sage held us hostage,” she says. “They wouldn’t even give us the older version to load. So, it’s like we were hit with ransomware twice.”

Fortunately, a consultant restored Seneca Cayuga’s data without the agency paying additional fees to Sage or sending the bitcoin the attacker requested.

With the entire organization now on Acumatica, everyone is more efficient, Raub says. But it’s hard to quantify the amount of time saved on tasks such as tracking receivables, accessing information, or from using customizable dashboards.

“Every time we do a weekly receivable billing, we put an invoice into Acumatica and that allows us to know if there are any billings outstanding,” Raub says. “We know that we haven’t received them by looking in Acumatica and seeing what’s outstanding, whereas the MEDISCA EMR wasn’t that great at it. So that helps us with our aging and collections.”

Mozaic tracks resident money within the new ERP. “It works great,” she says. “The house managers just look in Acumatica and see what a resident has available to spend without having to call finance to find the information.”

“As soon as we close a month, executives and budget managers look at their budgets to actually see their variances, why something was high or low, and understand their budgets much more quickly.” Those self-service features dramatically reduced calls and questions to the finance team, alleviating interruptions, she says.

Mozaic is deploying Acumatica Manufacturing to learn its production costs and boost transparency about every product’s profitability.  “We bid military contracts, and nonprofits are not allowed a large profit margin but can recoup costs. So, we need to know our costs inside and out,” Raub explains. “We’ve been tracking via spreadsheets, time studies, and other manual tracking efforts. Acumatica Manufacturing will make us more accurate. The manufacturing team will know quickly whether to bid on a contract or not. We won’t spend time pursuing contracts that won’t be profitable for our organization.”

Mozaic has already moved forward with its mission to help other nonprofits. For example, they announced an alliance with Challenge Workforce Solutions just eight months after the broader Acumatica implementation. Challenge Workforce Solutions is based in neighboring Ithaca and focuses on community-based pre-vocational and supported employment services for people with disabilities, mental health diagnoses, and socioeconomic or legal obstacles. It also provides contract staffing solutions that augment operations.

The partnership will help the Challenge team cut its administrative costs in half by folding it into Mozaic’s Acumatica platform.  As part of this agreement Mozaic will bring its vast array of services to Tompkins County, home to several colleges including Cornell University. The county has 102,000 residents, and previously was the only county in New York State that didn’t have an Arc, says Raub.

With Acumatica Cloud ERP, “we have an administrative backbone that is lean, transparent, efficient, timely and affordable,” she says. “We are going to pull their administrative structure into ours, convert them to Acumatica, eliminate a lot of their software programs, save them money, and save their mission. And we want to do more of that.”

Mozaic plans to keep on tripling, Raub says. Its Arctic Gear brand is producing new products, its lawn mowing, and snow removal business is exploding, and the mission is expanding.  “Our goal is to keep on growing, and we know Acumatica is going to be able to do that with us,” she says. “Acumatica is a part of everything we do and supports every single thing that is missional to us.”