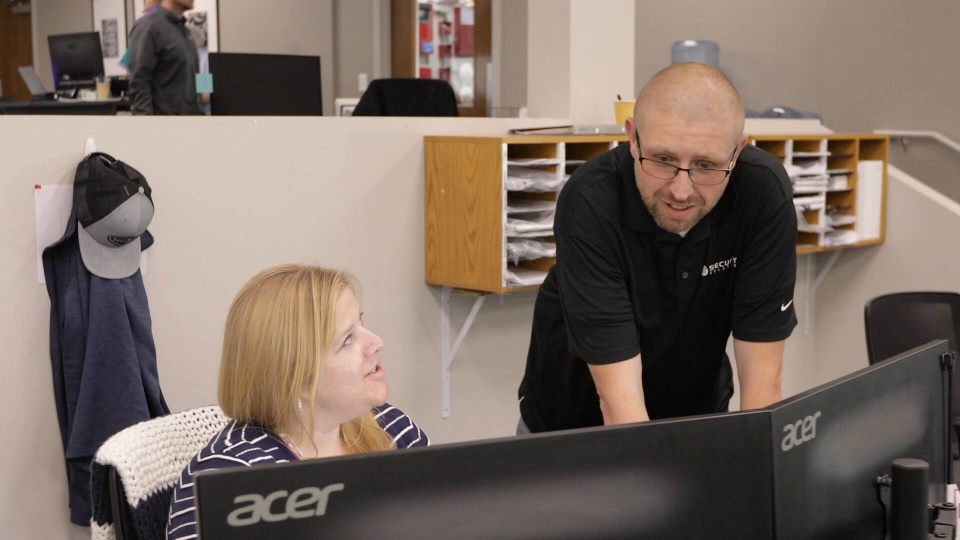 "We searched for a provider that was built for the cloud and selected Acumatica TRUE Cloud ERP. Now we can be seamless by using CRM and the Mobile App, all departments in Security Solutions — locksmith, retail, service, sales, inspections, testing — have instant access to information, helping to speed business and lets us focus on what we do best, which is to design, implement, execute security solutions that provide peace of mind."

Security Solutions NW was founded 100 years ago as a locksmith shop in Bellingham, WA just an hour and a half north of Seattle. The company grew dramatically when it expanded its services to include digital security, surveillance, and fire alarm systems for residential and commercial customers, moves instituted by the second generation, Jamie and Tobey Vos.

When sales and headcount of the small company doubled, Brian Rowerdink, newly hired as the company’s financial controller, recognized the company’s ageing software wasn’t going to be able to keep up.

“There were a lot of things the system wasn’t doing for us,” Rowerdink says, explaining that the company had seven divisions each with its own needs. The company was running on Total Office Manager, designed specifically for the HVAC industry, which Rowerdink describes as essentially “QuickBooks on steroids”.

It lacked financial controls, and couldn’t track contracts or recurring revenue, critical activities for Security Solutions NW with the shift from being solely a product-based company to one offering services and recurring contracts.

The legacy industry solution also lacked a CRM and had no way to track service contracts, which forced sales and the contracts manager to manually export data to spreadsheets. “We really had a need for a CRM because we had very unsophisticated sales tracking -basically none,” Rowerdink says.

SSNW business processes were also heavily manual. For example, the technicians in the field kept track of time by hand and turned paperwork into an admin to key into the software. Rowerdink knew his field services team could be much more productive if they had access to data in the field and if they could look up inventory and pricing.

The Inspections manager used an Access database to keep track of annual service contracts. He then had to manually update the database from work orders out of Total Office Manager into Access. “When we needed to change a unit price on our recurring revenue contracts, the service manager literally spent three days manually changing 1,500 contracts,” Rowerdink says.

Managing inventory was also challenging. SSNW carries some 7,000 SKUS because the company needs parts on hand in case a customer’s security system goes down. “We can’t wait a week for a part,” Rowerdink explains. “When we do new installs, we have to special order a lot of new products and the old system didn’t have a good system for project management. We couldn’t track inventory properly.”

"By using Case Management with Acumatica, the entire department can see the support ticket, all technicians and support agents have the visibility needed to make sure customer issues aren’t getting lost. Our team is much more efficient."

SSNW needed a connected, Cloud-based ERP that offered a CRM, better financial controls, a flexible contracting system and better way to manage inventory and projects. Rowerdink sought out a single connected system; one the company could grow with as the business changed and allowed them to keep up with ever-changing technology developments within their security services industry.

“I looked at Sage and Microsoft Dynamics and liked some of the work flows I saw but wasn’t finding an all in one system to meet our needs. We didn’t want separate applications,” he says. “I wanted all functions in one system. Most of the others required integration. I wanted something real-time and all connected.”

SSNW also reviewed security industry specific solutions. “We had a presentation, but the user interface left a lot to be desired, and the solution wasn’t flexible enough for our needs,” Rowerdink says.

Lucid Consulting introduced SSNW to Acumatica, which Rowerdink recognized offered them one connected system, one that could be customized and configurable to the way SSNW does business. It also provided everything on Rowerdink’s list. Most importantly, it was mobile, connected, and offered the financial, contract, and process controls the company lacked.

“Acumatica checked off all the boxes,” Rowerdink says.

With Acumatica, the company improved its financial controls and customer service, streamlined its service contracts and fixed problems with inventory.

“We used to have $10,000 to $15,000 in write offs each year because people couldn’t track inventory properly to jobs, which would skew financials during the year,” Rowerdink says. “With Acumatica, we eliminated 99 percent of the problems with project inventory.”

Rather than relying on historical data and manually creating spreadsheets, SSNW now has access to real-time information that saves executives time and is improving the company’s profitability.

For example, Rowerdink used to create a daily report he sent to five to 10 executives. “Now, anyone can get the information anytime they want it from a dashboard in Acumatica,” he says.

“Having opportunities in CRM gives us visibility into the sales project pipeline where we can see in real-time what’s close to closing as well as what’s in the pipeline,” Rowerdink adds, saying the company didn’t have that kind of visibility before.

Field technicians now clock in and out using a mobile application rather than hand-written timesheets. The internal office team doesn’t have to wait for paper-based information, nor do they need to key it into the system or remind technicians to bring them paperwork or help them decipher handwriting, processes which were prone to errors.

The back-office team no longer manually transfers that information into the financial system for billing either because Acumatica automatically routes information to where it needs to go. Having that information instantly means invoicing can be accomplished faster, Rowerdink says.

SSNW did not have a good way to track its accounts receivable service contracts in the prior system. If a contract was canceled, it required physically locating the paper-based contract and manual updates to the system. Now with contracts information in Acumatica, it’s easier to attach files and track the data, which saves time, Rowerdink says.

The company’s project accounting module, used to manage security installations, is much stronger and controlled in Acumatica, he adds.

“We have a job costing meeting once a week with all project managers, sales managers and tech managers,” Rowerdink explains. “As a job is closed out, we do job costing, which now is as simple as running a report.”

“In the old system, technicians wrote their time on paper and the admins would have to key the time entries into the system but that information didn’t flow to job costing,” he says. “The whole process was manual, and finance had to run reports in Excel and SQL, then key the information in somewhere else, which wasted time and was prone to errors.”

“With Acumatica, it just flows through the system faster, in real time, it’s controlled and much easier to use.”

Acumatica has improved customer service for SSNW. “We had no system to track our internal systems support,” Rowerdink says. “We were tracking everything through work orders and there was no way to see if a technician was on site for two hours or who needed a code change. It often took us longer to process the paperwork than it did to change a code.”

Using the case functionality in Acumatica, customer support can be prioritized, put on a case log, and serviced faster thanks to the visibility into the system.

“Before, a customer might call in with a request, and a service technician would make a manual note. Well, imagine what would happen if the technician was sick or loses the note?” Rowerdink says. “Now with Acumatica, the entire department can see the support ticket, all technicians and support agents have the visibility needed to make sure customer issues aren’t getting lost. Our team is much more efficient.”

With better business processes in place, increased visibility and more automation, Security Solutions NW is planning for continued rapid growth. The company’s revenues and staff continue to expand growing now to more than 60 people. SSNW likes the fact that, with Acumatica, they don’t have to worry about paying out astronomical user licensing fees associated with adding users due to Acumatica’s consumption-based pricing model.

“It is nice for us as we grow rapidly that we’re not caught in the space where we worry about licensing a user who might need to access the solution once or twice a week for a small work function,” Rowerdink says. “With Acumatica, we don’t have to think about that or pay for a full user license because the licensing model allows everyone to use it without becoming too costly.”

Security Solutions NW is expanding from the Bellingham WA based home office region into the greater Seattle area market, a move expected to significantly grow revenues. Executives are confident that Acumatica can scale with this growth, provide information they can trust, enable financial stability, control, and automation required to fulfill their mission to help their customers gain peace of mind with security solutions that work, while also building the company’s legacy of giving back to the community, both locally and globally.

“There are a ton of Acumatica features we’re not yet taking advantage of,” Rowerdink says. “We’re a small company but there’s no doubt this is the right solution as Security Solutions NW grows and for what we plan to accomplish with the business in the future.”

This Acumatica customer says yes—and then explains why in a Gartner Peer Insights report.
Download the report