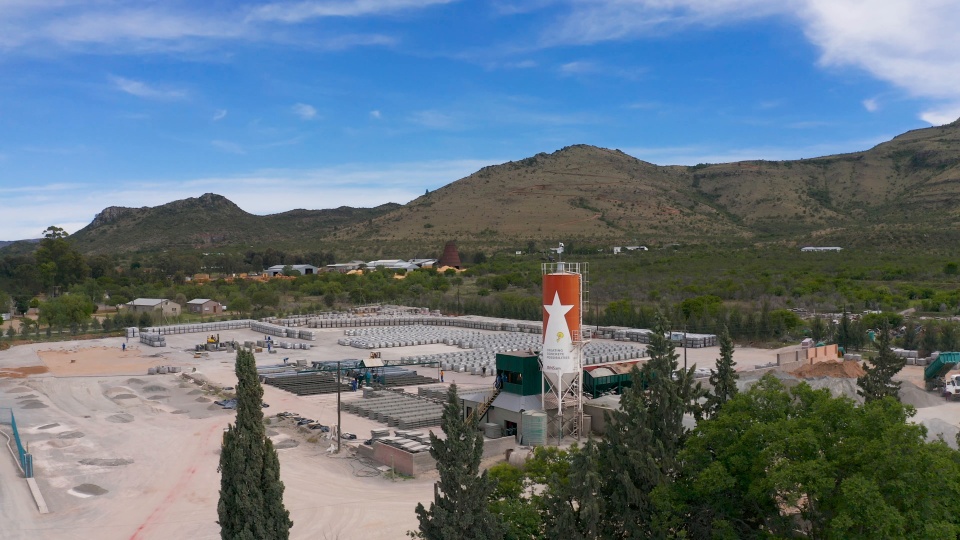 "Any ERP that you can go live with during hard lockdown and have all your staff trained and functioning remotely must be a solution for everyone to consider."
Graham Leonard, Chief Financial Officer & Operations Manager
Dukathole Group
Challenges
ERP Solution
Outcome
Challenges

Founded in Aliwal North, South Africa, 20 years ago, Dukathole Group became the country’s largest manufacturer of high-quality concrete bricks, reporting a 52% annual growth rate for the past decade as demand for its bricks exploded.

Cement bricks serve as the primary building material for houses allocated to approximately 12.5 million South Africans, who squat in settlements outside cities and in the gardens of formal dwellings. The South African government estimates a national shortfall of 2.1 million homes. According to the BBC, with an annual delivery rate of 136,000 homes, only 1.5 million of the 2.1 million needed will be available by 2030. Meanwhile, the population continues to grow.

Hoping to help close the housing gap, Dukathole’s entrepreneurial founder Charles Kieck and his wife Landi expanded the business into the Eastern Cape province of Queenstown in 2009 and began producing additional cement products, including roof tiles, pavers, lintels & pre-cast products. These moves transformed the business into a one-stop-shop for cement products. They also opened another brick-making production site in Herschel following a spike in demand.

Recognizing its Queenstown facility couldn’t supply the whole Eastern Cape with bricks, Landi decided to bid on two struggling brick makers in business rescue, INCA, which has two branches – each two hours in different directions from Queenstown and Laman.

However, simply making and selling bricks was not enough. By participating in the government’s Reconstruction Development Program or RDP housing market, the Kieck’s determined that every South African Rand (1 Rand = ~$0.06295 Dollar) saved means someone living in a shack could get a home. Landi realized acquiring MMS Developments, a construction company also in business rescue, would enable expansion into the home building market. Dukathole bid on all three companies even though MMS lost $R40 million over two years and Laman had not been profitable since 2006.

“We were quietly confident that we would be able to absorb this exponential growth and that our financial track record, lean management practices, and strong asset base would enable us to successfully obtain the funding required,” Landi wrote in an annual letter summarizing the acquisitions.

Part of that confidence stemmed from a Sage implementation in progress. Dukathole planned to have the ERP system running in order to share insights before the acquisitions closed. The detailed financial figures would strengthen their bids and help them secure funding.

The Mounting Costs of a Failed Sage ERP Implementation

Dukathole won and closed all three acquisitions: INCA in January, MMS in February, and Laman in July. But the Sage implementation was failing and threatened the business. For example, from August through October, the company could not generate customer statements, draw debtor statements of creditors for aging reports, or view inventory stock levels.

“It was a horrible implementation, one that didn’t work, and one that didn’t have any support,” says Graham Leonard, who joined Dukathole Group as head of finance and operations in the middle of that year. To make matters worse, “The Sage implementation partner did not understand our business, and this resulted in large bills and long turnaround times on minor change requests. In addition, Sage’s inventory management was extremely unreliable. Any configuration change had to be referred to the UK, and less than two years after we implemented Sage Live, they discontinued the product altogether.”

Dukathole had a single IT person on staff, tasked with dealing with technology maintenance, unreliable electricity, multiple wireless internet providers, and remote servers. “Sage was remote cloud and required a lot of maintenance and went down a lot,” Leonard says.

Without Sage, the company’s six divisions operated on six different financial systems that included various instances of Sage’s legacy Pastel accounting software. To provide the necessary acquisition paperwork, “We had to provide one consolidated spreadsheet. Everything had to be consolidated in Excel, and that was a nightmare,” Leonard says.

They knew they needed a new financial system that provided accurate data so they could:

Dukathole narrowed its list. After the Sage fiasco, “we didn’t want pie in the sky promises but to see the systems work, and learn about the people who would deploy it,” Leonard says. “The major suppliers didn’t respond or sent junior people who couldn’t show us how their systems worked and often said ‘we’ll get back to you.’”

That wasn’t the case with Acumatica Cloud ERP and its partner QEDO, which provided a detailed demonstration of how various Dukathole processes would work in Acumatica.

“Any ERP that you can go live with during hard lockdown and have all your staff trained and functioning remotely must be a system for everyone to consider,” Leonard says.

Having Acumatica as its financial, manufacturing, and construction foundation provided Dukathole with the information it needed to transform a concrete brick manufacturer into one of South Africa’s leading home builders and home building product suppliers.

Dukathole is highly efficient and lean with a flexible business solution that provides real-time access to critical data from all units on one unified platform. “Having one view of every single entity allows us to see if an entity is not pulling its weight so we can make adjustments quickly,” says Leonard. “You don’t want the group to suffer if one of the other divisions is struggling.”

“Landi is an idea machine,” he adds. “When she sees an opportunity, she deploys it immediately, which is why we deployed Acumatica so efficiently. The software provides data very quickly, and we can use it to make decisions.”

Having access to data from anywhere is vital for a distributed company. “Acumatica’s mobile app allows the owners to pull up dashboards on their phones while traveling, so if they have to travel to East London, that’s four hours where they can continue to be productive while on the go,” Leonard says.

The staff spends less time entering data and creating manual spreadsheets and more time using the data to improve decision-making. For example, they analyze real-time data on dashboards. The personalized dashboards provide flexible reporting that helps them visualize operations and drill down to examine details on any of its eight branches, so they can identify challenges quickly and adjust accordingly.

The centralized data streamlines quarterly and annual financial reports and provides critical data to the government agencies that issue the housing contracts.

Dukathole deployed a full suite of Acumatica modules, including Manufacturing, Distribution, Project Accounting for construction, and CRM. In addition, the suite allowed the company to quickly expand into new lines of business with operational and manufacturing processes that help them better tracks costs, such as bills of materials.

“Now, it’s just one click of a button because Acumatica is so open-ended, allowing for easy integrations.”

Acumatica’s open API combined with its unlimited user licensing model allowed Dukathole to create a delivery alert system for its more than 30 trucks using SMS text notifications, improving delivery times and customer experience. “Drivers can automatically notify customers and project owners that a truck has left, making it easier to monitor throughout the delivery process.”

Choosing an easy-to-use solution was essential to support the diverse staff.  In addition to its delivery drivers, independent drivers can also send critical data to Acumatica using the mobile application.

Acumatica provides Dukathole with a solid financial foundation to play an essential role in addressing South Africa’s housing crisis.   “Housing is a major problem, and we’ll never catch up,” says Leonard. “Just a few months ago, the government told us we were the only contractor to meet its deadlines and remain in budget, so rather than building one of every three houses, they want us to build all the houses in the Cape.”

“The flexibility in Acumatica helps to support our entrepreneurial spirit,” says Leonard. “When we add a new company, we don’t have to buy extra software user licenses. Instead, we just create a new branch in Acumatica and quickly integrate them into Dukathole Group.”

Now that every branch has dashboards and live financials, Dukathole is fielding requests from customers for EDI to integrate into their businesses, Leonard says. As part of the company’s commitment to running a lean, efficient, and profitable business, it is deploying as much of Acumatica’s functionality as possible.

Dukathole has pledged to build an extra home for every 100 government houses constructed and give it to those in need.  With Acumatica at the helm driving efficiency, Dukathole and the Kieck’s have donated more than 30 homes, including one for a 101-year-old homeless woman.

“Acumatica really is an all-in-one, adaptable solution that quickly enables everything you need to run your business. And it is effortless to use,” says Leonard.