Where in the World is that Data?

Some time ago, I was given the task to analyze the requirement to delete a warehouse that had been created during an implementation.  The customer did not want to use the defined warehouse anymore.  But unfortunately, because it had been used for a few test transactions, it could not be deleted (due to obvious referential integrity) even though it was “empty” as far as the user could see.

Right off the bat, you can see that this request is much more complex than what the customer had asked for. In this case, not only do we have to delete this warehouse, but in order to do so, we must also do the following:

Also, you may notice that this process requires us to select another warehouse that will become the target or beneficiary of our updates when needed.  In this case, the warehouse SiteID to delete was 36 and its target was 4.

Now, even if the database structure is familiar to you, it is not necessarily an easy job to find all the references to the warehouse value – even if you know (or you think you know) all of the tables.  Therefore, in order to save time searching for the rows, I decided to create a dynamic SQL query that would help me find any field with a certain name pattern (SiteID is the warehouse internal field value) and with a given value (36).  Now, this script is not purely an Acumatica script, per se. This is because of Acumatica’s natural and standardized table/field nomenclature; it becomes possible to use the kind of script.

First, we need to find all tables having a SiteID.  Obviously, in some cases, the field could be named OriginSiteID or DestSiteID, but you get the idea.

Find the Field in All the Tables

Here’s a screenshot of the results (partial) after running the above script:

Next, I wanted to build a dynamic query that would search all the rows of all the tables I have found in the previous result.  Using this query, I wanted to generate update and delete scripts for each table and field.

Declare a virtual table and some variables

Finally, look at the result of the found values and update/delete scripts generated: 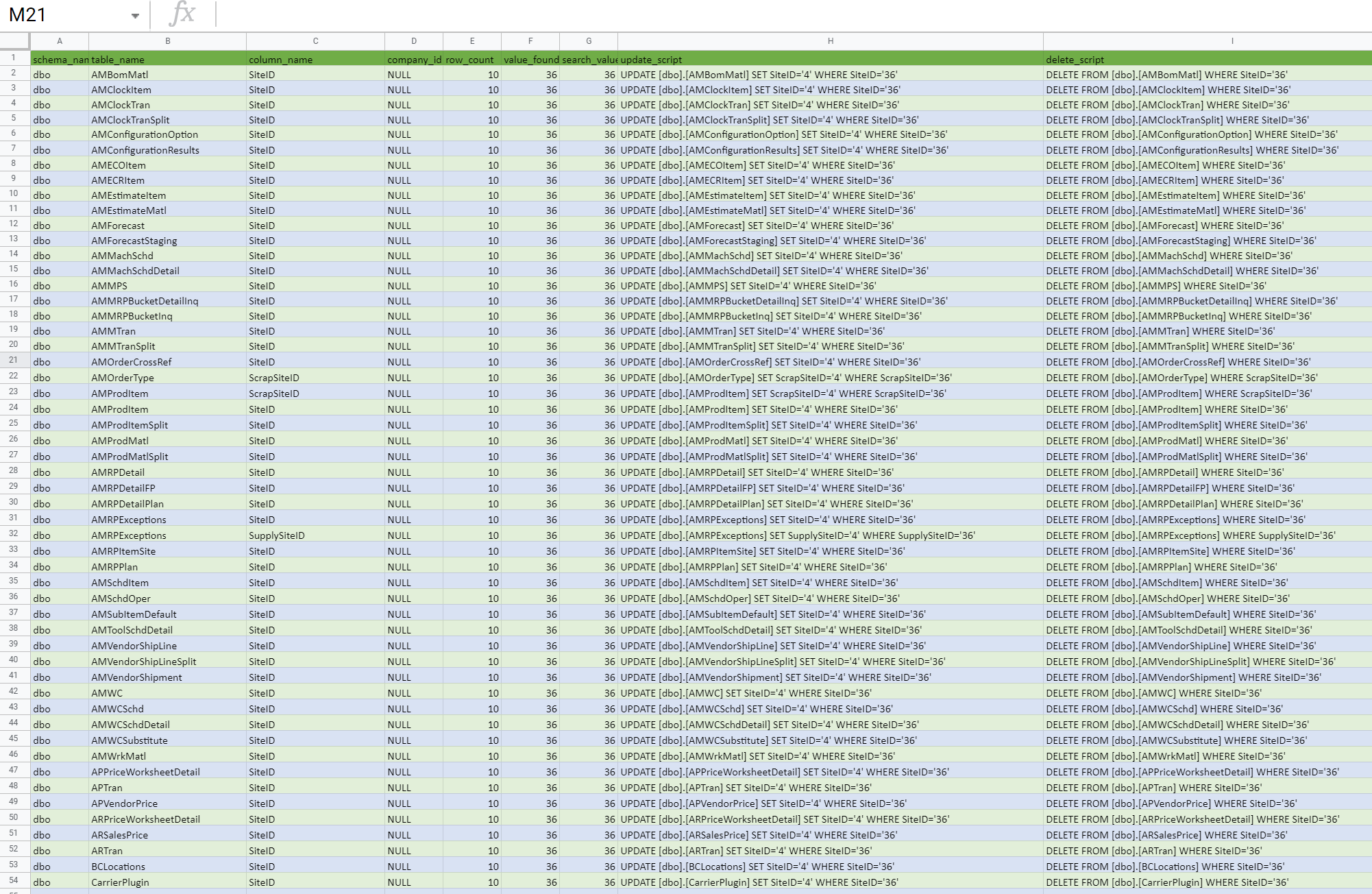 This is obviously not merely a quick fix for what appears to be a simple problem. However, I think that this is a great tool for consultants, support engineers, and developers to search for problematic/leftover data. We have also successfully used it with ScreenID, BOMID, InventoryID, CustomerID to fix all kinds of problems.  Additionally, it can be used to recode primary keys that are used by foreign keys which were strictly strings without an underlying integer key (such as ShipVia, TermsID).

It saved my life, if you will, quite a few times over the years.  I hope you find it useful as well, saving you and your colleagues a lot of time and effort in the future.

Stéphane’s career, spanning more than 25 years, started as an ERP developer on a 4GL language called Miracle. After a few years, he was sent to Philadelphia to work with Weyerhaeuser for a 10-day contract that lasted 4 years, where he helped re-engineer the Transportation and EDI modules. He created, among others, nearly a dozen new EDI transactions. He then wondered through the desert of customizations and Java middleware in search of his ERP Graal. In 2016, he was hired by the video game studio Behaviour Interactive where he selected, implemented, and integrated an ERP with other cloud applications. Which ERP? Acumatica of course. In 2018, he decided to come back to his roots as an ERP developer and started working for top-tier Acumatica Gold partners to share his knowledge, passion, and ideas. He has been happy ever since.

Get Acumatica Blog email updates as newsletters delivered bi-weekly to your inbox. Convenient!